That gaze again from Long Chau. The Shadow’s Child was used to respect or fear; to downcast eyes; to awkwardness, even, with people who weren’t used to dealing with a shipmind, especially one that wasn’t involved in passenger service.

The Universe of Xuya is filled with Vietnamese scholars and living mindships.

Long Chau needs to solve a problem, and she comes to the mindship The Shadow’s Child for help. They both have problems, but together they may be able to solve these as an aside to the problem Long Chau originally needed help for.

Besides being a space opera this beautiful novella is a pastiche of the Holmes/Watson pairing with Long Chau as Sherlock Holmes and The Shadow’s Child as Dr. Watson.

The Universe of Xuya is a fascinating construct. To a Westener like me, the idea of a universe dominated by Vietnamese makes for very interesting reading. I have no real knowledge of how the Vietnamese or Chinese cultures worked. Aliette de Bodard manages to bridge the gap of understanding and give at least a very interesting insight into Eastern societies of old. As usual her nearly poetical use of language makes her stories a delight.

Aliette de Bodard has written about 30 stories in her Universe of Xuya, where the Vietnamese and Chinese dominate and have created a society based on their old cultures from earth. The Tea Master and the Detective won the 2018 Nebula Award for best novella and is also nominated for the 2019 Hugo Award.

In September 2019 a collection of her short works (with lots of Universe of Xuya stories and Dominion of the Fallen stories included) will be published by Subterranean Press. Press the button below to read more.

Of Wars, and Memories, and Starlight will be published in September 2019 by Subterranean Press in a signed and numbered hardcover edition with a beautiful cover by Maurizio Manzieri:

At the moment Aliette de Bodard is working on a new novel in the Universe of Xuya, which I am really looking forward to.

Press the button below to see another beautiful cover for a trade paperback edition of The Tea Master and the Detective . 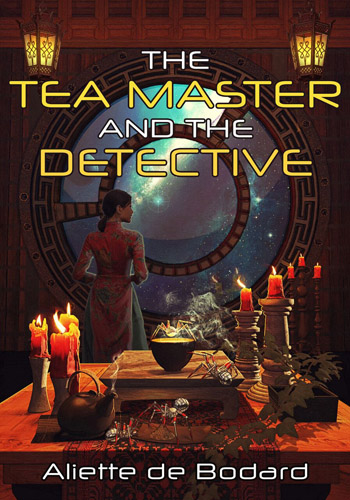